Odd Girls and Twilight Lovers: A History of Lesbian Life in Twentieth-Century America 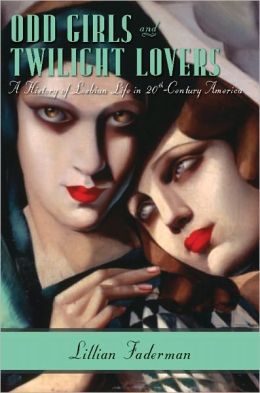 Odd Girls and Twilight Lovers: A History of Lesbian Life in Twentieth-Century America was first published in 1991 by Columbia University Press; won the American Library Association’s Stonewall Book Award for non-fiction in 1992; was selected as the “Editor’s Choice” at the 1992 Lambda Literary Awards; was a New York Times Notable Book of 1992; and in 2011 was 99th on Ms. Magazine’s list of top 100 feminist non-fiction books. Unlike Lillian Faderman’s first historical work, Surpassing the Love of Men: Romantic Friendship and Love Between Women from the Renaissance to the Present, which surveyed five centuries and the Western world, Odd Girls focuses on one century, the twentieth, and one country, America. The subject remains the same: lesbian history.

Odd Girls and Twilight Lovers presents—along with research derived from journals, unpublished manuscripts, songs, media accounts, novels, medical literature, and pop-culture artifacts—a symphony of living lesbian voices, composed from extensive interviews conducted by Faderman, who makes it clear that lesbians deserve to speak for themselves and not be defined by outsiders. This book is not concerned with speculations surrounding the definitions of “lesbian” or “sexual drive,” but with “tracing the development of lesbian subcultures,” and with “the metamorphoses and diversity of lesbians as they related individually and/or collectively to changing eras in American life,” as the introduction states.

Odd Girls approaches the history of lesbian life from a social constructionist point of view (in which “certain social conditions were necessary before ‘the lesbian’ could emerge as a social entity”) rather than essentialist point of view (the belief that “one is born a lesbian and that there have always been lesbians in the past just as there are lesbians today”). Faderman explains in her introduction that the “possibility of a life as a lesbian had to be socially constructed in order for women to be able to choose such a life. Thus it was not until our century that such a choice became viable for significant numbers of women. This book traces the ways that happened.”

Odd Girls and Twilight Lovers is divided into 11 chapters:

1. “The Loves of Women for Each Other”: “Romantic Friends” in the Twentieth Century

The early American feminist movement opens the door to financial self-sufficiency for thousands of women. This enables women to have romantic friends and/or Boston marriages, in which they “could make their lives with another woman.”

2. A Worm in the Bud: The Early Sexologists and Love Between Women

The theories of the European sexologists who characterized same-sex relationships as “abnormal” and “unhealthy” worm their way into American consciousness, putting an end to the innocence of romantic friendship, but giving lesbians “an identity and vocabulary to describe themselves,” which makes it easier for lesbians to find each other and “organize publicly.”

3. Lesbian Chic: Experimentation and Repression in the 1920s

Communities of lesbians spring up in unlikely places such as Salt Lake City; and in Harlem and Greenwich Village, bisexual experimentation becomes chic, despite the growing scrutiny and devaluing of lesbianism by sexologists and psychologists, whose nasty characterizations of lesbians would be “reflected in literature and popular culture for the next half century.”

The economic hardship of the Depression, and the moral shame inflicted by society, renders lesbians speechless and intimidated, but the now inescapable knowledge of “female same-sex love” is “essential to the formation of a lesbian subculture” since it helps women to define themselves as lesbians, both individually and collectively.

The military during World War II was “the ideal breeding ground for lesbians,” producing a “government-sponsored” subculture; pants become “acceptable garb for women,” which helps produce a “distinctive lesbian ‘style’;” and the migration of lesbians to big urban centers increases the number of bars that cater to lesbians. But after the war, the public image of the lesbian as sick and unpatriotic reinforces the secrecy and shame that make large lesbian subcultures not yet visible.

6. The Love that Dares Not Speak Its Name: McCarthyism and Its Legacy

The “age of authority,” in which the opinions of authority figures are held sacrosanct, causes more suffering than ever to lesbians, who are hounded in witch-hunts and live in perpetual fear of losing their hard-won jobs and homes, and closely guarded reputations; “[h]owever, even the persecution of the 1950s aided in further establishing lesbian subcultures,” as thousands of American women are made aware of lesbian identity.

7. Butches, Femmes, and Kikis: Creating Lesbian Subcultures in the 1950s and ‘60s

Young and working-class lesbians develop a subculture around gay bars, softball teams, and butch/femme roles, while upper- and middle-class “kiki” lesbians prefer to blend in to society; however, neither subculture has the conviction, knowledge, or clout to demand their rights as a minority group.

8. “Not a Public Relations Movement”: Lesbian Revolutions in the 1960s Through ‘70s

Young gay women and lesbian-feminist revolutionaries, free of the indoctrination in shame and self-hatred of earlier decades, explode onto the scene and begin to change society. These lesbians refuse, to begin with, to deny their own existence, while other lesbians are angry at the revolutionaries and want to keep a low profile. But all agree that “[i]t was not lesbians...but society that was sick.”

9. Lesbian Nation: Creating a Women-Identified-Women Community in the 1970s

Radical lesbian-feminists grow more organized and effective, breaking down barriers to gay and lesbian rights, and creating a whole new world of “women’s culture,” which gives hope and courage to all lesbians, even those more moderate lesbians who are critical of the radicals.

Lesbian sexual radicals and cultural feminists disagree about how far lesbians should be liberated from the “sexual limitations that had been imposed on them as females.” The radicals’ goal is for women “to demand freedom and sexual excitement as lesbians seldom dared before,” but the AIDS epidemic puts a damper, for the time being, on sexual experimentation.

An increase in economic opportunities for lesbians results in an expansion of the visible lesbian middle class; “clean and sober” lifestyles become fashionable; the visible lesbian community becomes more diverse; there is an increase of lesbians with children; and “the sense of family and the larger sense of community” grows stronger. Young lesbians, meanwhile, react with more activism for the “Queer Nation.”

In her “Epilogue: Social Constructions and the Metamorphoses of Love Between Women,” Faderman concludes that “there are no constants with regard to lesbianism...Circumstances and events that once seemed inextricably a part of lesbian culture and even of the definition of lesbianism itself have constantly come and gone throughout this century.” To limit the definition of “lesbian” to one “rigid and simplistic” category or classification is counter to the actual “lived experiences of love between women,” in which a wide variety of subcultures are created by lesbians themselves.