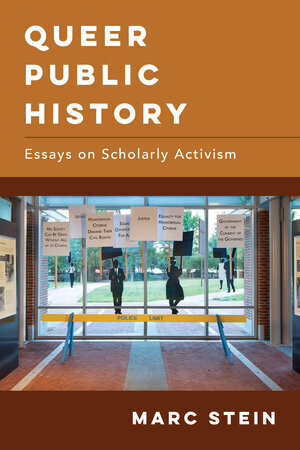 Over the course of the last half century, queer history has developed as a collaborative project involving academic researchers, community scholars, and the public. Initially rejected by most colleges and universities, queer history was sustained for many years by community-based contributors and audiences. Academic activism eventually made a place for queer history within higher education, which in turn helped queer historians become more influential in politics, law, and society. Through a collection of essays written over three decades by award-winning historian Marc Stein, Queer Public History charts the evolution of queer historical interventions in the academic sphere and explores the development of publicly oriented queer historical scholarship. From the AIDS crisis of the 1980s and the rise of queer activism in the 1990s to debates about queer immigration, same-sex marriage, and the politics of gay pride in the early twenty-first century, Stein introduces readers to key themes in queer public history. A manifesto for renewed partnerships between academic and community-based historians, strengthened linkages between queer public history and LGBT scholarly activism, and increased public support for historical research on gender and sexuality, this anthology reconsiders and reimagines the past, present, and future of queer public history.