An Army of Ex-Lovers 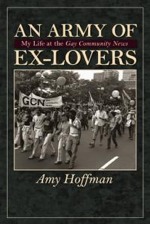 An Army of Ex-Lovers: My Life at the Gay Community News (Amherst: University of Massachusetts Press, 2007). By Amy Hoffman.

An Army of Ex-Lovers is a memoir about the Boston LGBT community of the 1970s and specifically about the experience of the author, Amy Hoffman, who worked on the staff of the Gay Community News from 1978 – 1982, and for several years thereafter served as a board member and writer for the paper. GCN was founded in June 1973 at the Charles Street Meetinghouse—at the time, a Unitarian Universalist church and community center that housed a coffeehouse and a program for gay youth—but quickly moved to its own offices on the second floor of 22 Bromfield Street, in the heart of downtown Boston.

During those early years after the Stonewall Riots, Boston was a center of national gay organizing, teeming with activists, many of them veterans of the antiwar and feminist movements. So many gay organizations were springing up and wanting to do so many different kinds of activities—lobby for a gay rights bill, organize a gay men’s child care collective, produce plays and concerts, run lesbian dances, go hiking in the White Mountains—that they needed a way to keep in touch with each other.  Gay Community News started with fairly modest ambitions, but almost immediately evolved from a mimeographed event listing into the country’s only LGBT weekly newspaper.

Nobody on the paper had any journalism experience, but that was only a minor obstacle. Organized as a collective, the members figured things out as they went along.  GCN published news; readers’ letters and op-ed essays (when an article was attacked from all sides, the staff felt they had done a good job); editorials; reviews of gay films, books, plays, and concerts (there were few enough of these that GCN could cover them all); humor and parody; personal stories; profiles and interviews; gay history; political reflection and analysis; gossip; comic strips; crossword puzzles. All this content distinguished GCN from the other gay publications of the time, which focused mainly on happenings at bars that could be illustrated with photographs of sexy guys, and puff pieces about celebrities and local heroes.

In contrast, GCN’s mission was explicitly activist—its goal was to encourage readers to come out of the closet and become involved in the movement, and to provide a forum where ideas and actions could be proposed and debated. The staff often claimed that GCN was neutral and open to all perspectives, including conservative ones, but that was ridiculous. GCN supported the most radical expressions of the gay liberation movement, which believed in upsetting the social order and in creating alternatives to traditional gender roles, definitions of sexuality, and hierarchical power structures of all kinds.

Gay Community News never had a circulation of more than 5,000—although at its peak it had subscribers in all 50 states and 12 foreign countries.  It was always short of money.  Its politics frightened off most advertisers.  Still, the paper had an influence way out of proportion to its circulation figures. It assured readers that a gay life could be whole and satisfying, and could include friendship, community, and love.  The cutting-edge issues of today’s movement, including same-sex marriage, gay and lesbian families, transgender identities, religion, race, and economic justice, were all debated in the pages of GCN, which never shied away from a controversy—it sought them out and probably even created a few.  Reporters, readers, and avid letter-writers brought incredible passion to a wide range of topics: the role of bars in the queer community (which immediately lost GCN its most potentially lucrative source of advertising); intergenerational sex; s&m; pornography; drag; racism; sexism; socialism; feminism; reproductive rights; nonmonogamy; US policy in Central America; Democratic and Republican politics—and later, of course, AIDS.  The scope of GCN’s coverage was itself a source of constant debate:  what exactly was “gay community news”?

GCN was a genuine community effort. The small, ever-changing paid staff and a large, dedicated group of volunteers did everything from writing the articles to laying out the paper to stuffing it into envelopes.  Unusual among gay organizations, the GCN collective included both women and men from the very beginning and was mixed in terms of class and age, comprising people from their 20s up to their 60s.  More typically, it was less diverse in terms of race—most of the staff and volunteers were white, although the group also included a few African Americans, Asians, and Latino/as.  It included people with gender definitions of all kinds, including a few transgender women (although not transmen—that is a more recent phenomenon), drag queens, transvestites, butches, femmes, and people in between.

A stint at Gay Community News left no one unmarked. It was not simply a newspaper.  GCN’s was the only listing under gay in the Boston telephone book; thus, phone duty could involve anything from taking down the copy for a personal ad to persuading a distraught kid to call the gay youth group instead of committing suicide.  The small staff was paid so little to do so much that hardly anyone could tolerate it for very long.  Instead, staffers, many of whom went on to become leaders of gay organizations, journalists, and authors, whirled briefly in and out.  GCN trained an entire generation of activists.

Before computers, fax machines, cell phones, or Federal Express, GCN appeared without fail every week—including after the 1982 arson fire that destroyed the paper’s Bromfield Street office, which marks the end of the period covered in An Army of Ex-Lovers, and then throughout the crushing, daily crisis of AIDS.  GCN ceased weekly publication in 1992, when changing times worsened its chronic financial problems into a full-blown crisis, and volunteers, subscribers, and advertisers leaked away, but it continued to function in other formats until finally closing its doors in 1998.